Friends who are visiting Japan often ask us for recommendations regarding the best places to see and best things to experience here. The country has so much to offer that a short trip here can be amazing and overwhelming at the same time – and the thought of finding yourself suddenly illiterate may be daunting, at least at first. After a summer’s worth of globetrotting in Europe and the US, I’ve had some time to sift through my memories and photos of my first year in Japan and I tried to come up with a set of things to add to your sightseeing list that I think will provide a fairly rounded-up, diverse picture of the way I see this country after one year of living here. I tried to make it as season-independent as I could, so you can use it any time you plan to come over – but if you happen to travel here around the first week of April, be sure to have a look at our cherry blossom photo gallery, and if you arrive some time between the end of October and the first week of December, check out some of our favorite autumn foliage spots from 2013 and 2014! And just a little disclaimer before getting started – I’m probably an exception in that I’m one of very few foreigners living in Japan who never really had much of an interest in manga and anime, so I hope you won’t be disappointed to find those aspects of Japanese culture missing from my list. It is a subjective list, after all. Right, then, here we go.

#1: Get dazzled by the neon lights

You’ll probably find this very easy to achieve – it’s almost always one of the first impressions tourists have of Tokyo, and it’s a lasting one. In the photo below: the famous Shibuya crossing, where chaos and order somehow seem to coexist. 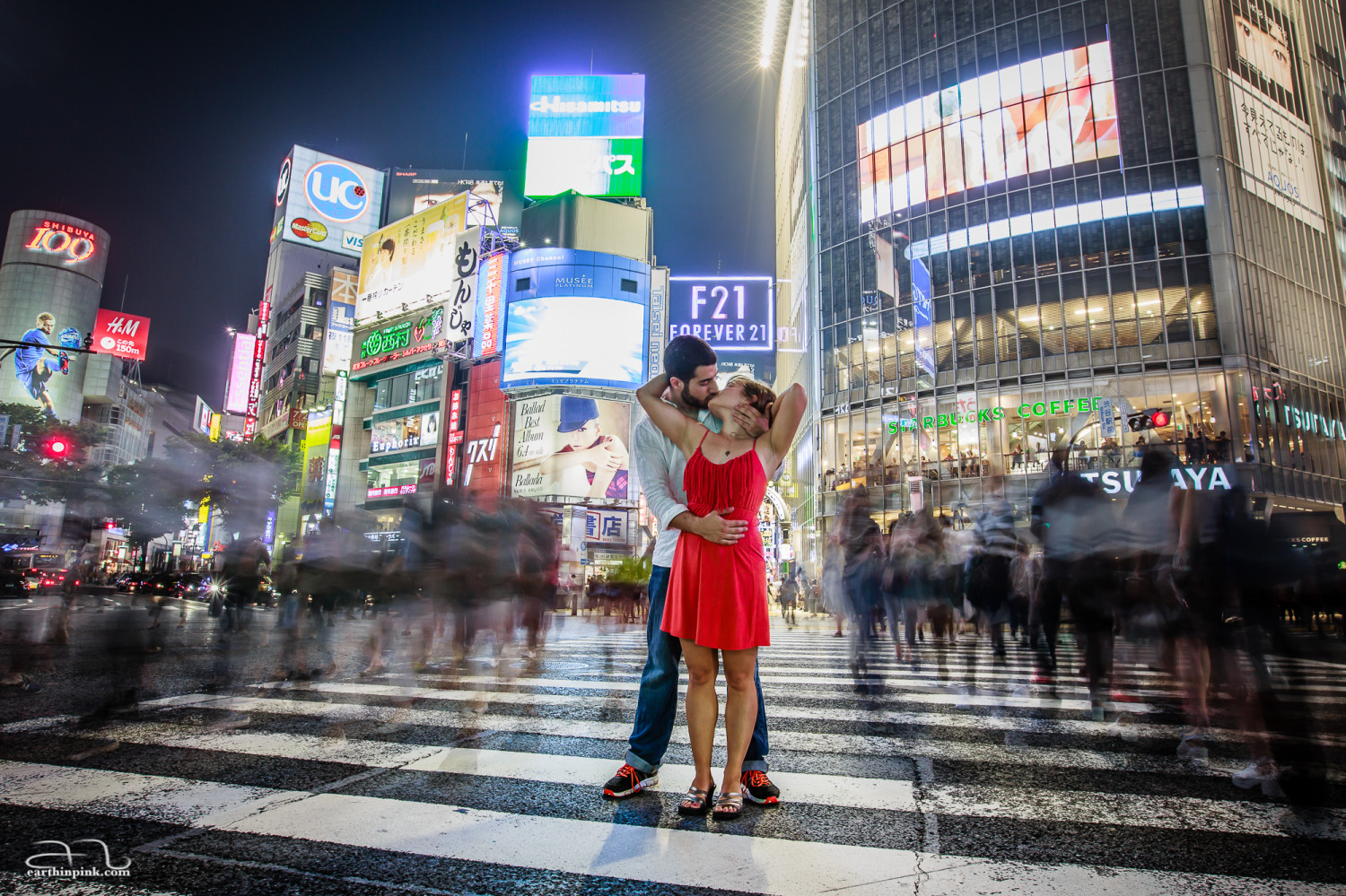 I went to the famous Shibuya Crossing one night to try to capture that special feeling when one is caught in a beautiful moment and time seems to stand still while the rest of the world is whizzing by. This is the result: a photo of two of my friends who proved to be very patient and talented models, and learned the hard way that standing still for 2 full seconds is not an easy feat!

#2: The best sushi in the world (because why else did you come to Japan if not this?)

The sushi stalls inside Tsukiji market sell heaven in the form of food. The down side: the ideal time to get there is for an early breakfast, around 8am. If you think your tongue can’t savour or your stomach can’t handle raw fish that early in the day – I did, too. I was proven wrong. If you don’t know what to order, always just ask for the recommendation of the house – osusume (おすすめ).

In the photo below: the famous Tsukiji tuna auction. Impressive as the size of these fish may be, I have found it not to be worthwhile waking up at 4am to witness the spectacle (unless you’ve been out all night partying in Roppongi). Just go there for the sushi. You can experience the hectic heartbeat of the market any time, also outside the hours of the tuna auction. 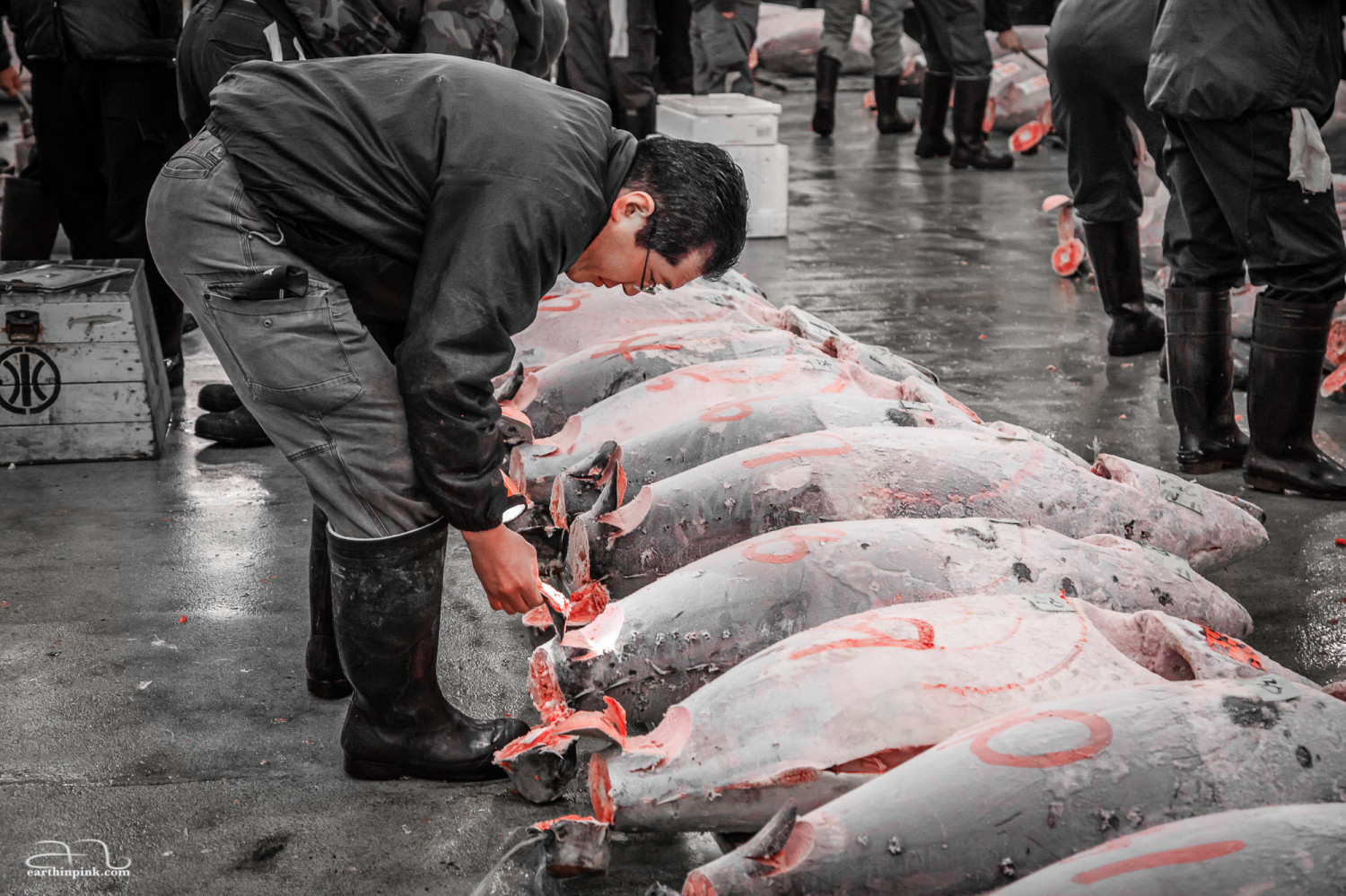 Potential buyers inspect the merchandise just before the tuna auction at the famous Tsukiji fish market.

#3: Get lost exploring one of the big temples around Kyoto

The area in and around Kyoto is probably the single best place to experience traditional Japan – the arts and crafts, temples, Zen gardens, tea ceremonies. But don’t just go there to admire the big, imposing temples; get lost roaming around the temple grounds, and find the little details and patterns that make the scene all the more amazing. In the photo: the Kasuga Grand Shrine in Nara, the capital of Japan from 710 to 784 and a UNESCO World Heritage Site. 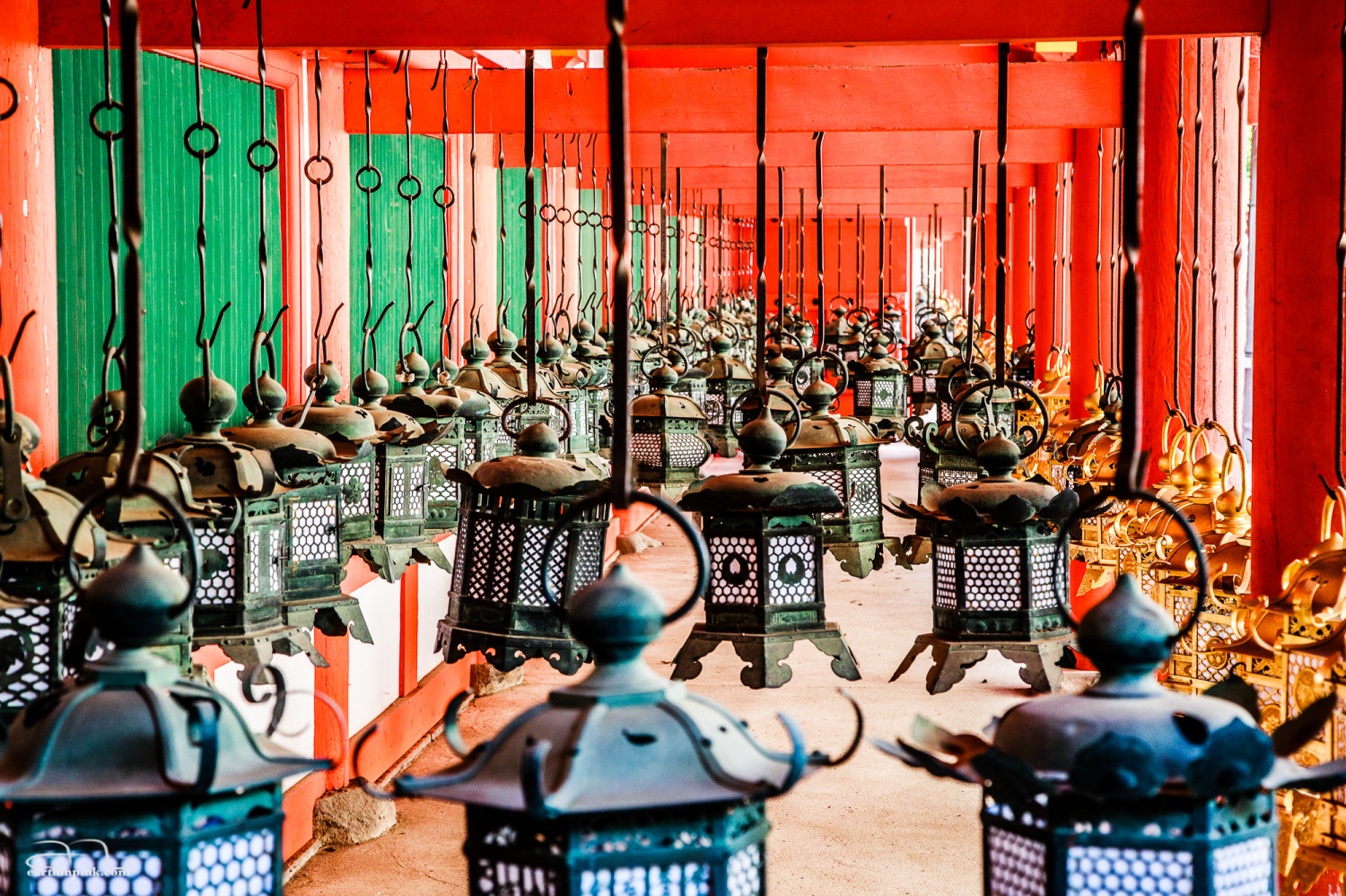 Getting lost among lampions at the Kasuga Grand Shrine in Nara.

If the Kyoto region is too far away for your travel schedule or budget, consider visiting the temples of Kamakura and Nikko, both of which are much closer to downtown Tokyo and can in principle be visited on a day trip.

Mount Fuji is a well-known symbol of Japan and highly revered in the Japanese culture. On a very clear day, you can probably glimpse the exceptionally symmetrical cone of the tallest peak in the country from any skyscraper in Tokyo and Yokohama that offers an unobstructed westward view. For a closer look, you can admire the reflection of the mountain on the surface of one of the Fuji Five Lakes in Yamanashi prefecture – the easiest one to access is Lake Kawaguchiko. For bonus points, during the summer months you can climb to the top of the mountain. In the photo: during an annual festival that takes place around May, huge fields of pink moss are in bloom at the base of Mt. Fuji. 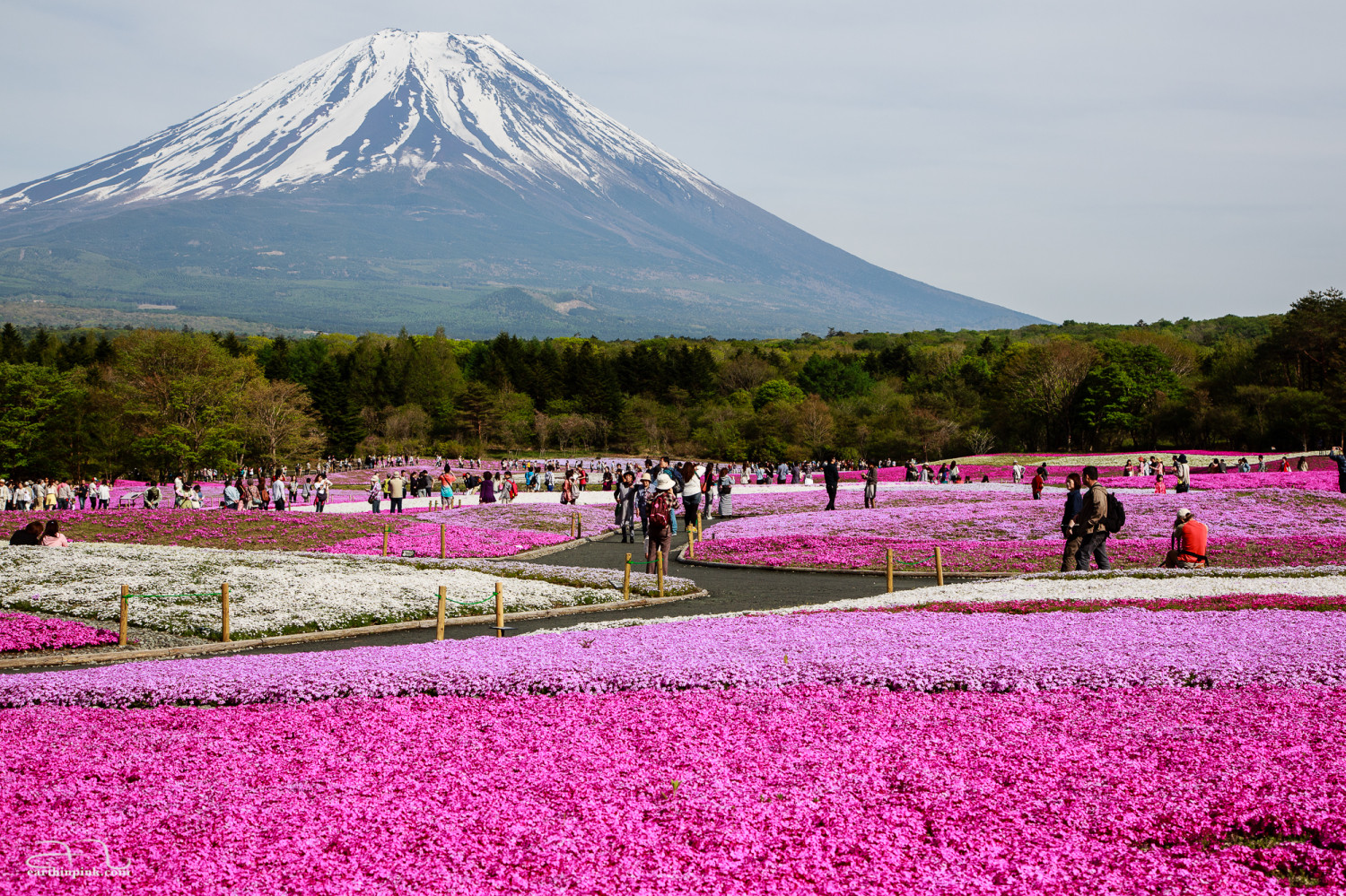 The Harajuku district is known internationally as a center of Japanese youth culture and fashion, and it’s definitely worth simply strolling the streets in the evening and taking in sights of the colorful and sometimes quite creative crowd.

Far from being just about wrestling, sumo includes many ritual elements, such as the use of salt purification, from the days when sumo was used in the Shinto religion. So, although most matches tend to be over in the blink of an eye, it is the preparation that leads up to the actual fight that is the most fascinating part of the show.  The best way to watch a sumo match is during one of the six yearly tournaments, three of which take place in Tokyo (in January, May, and September). At other times, you can visit a sumo stable and watch a practice fight, and also witness how the wrestlers live and how all aspects of their daily lives, from meals to their manner of dress, are strictly regulated according to tradition.

An unusually action-packed sumo wrestle at the tournament in Tokyo in May 2014. Most fights are over in the blink of an eye with one of the wrestlers stepping outside the ring, but this was a captivating exception.

#7: Go to a traditional onsen

Onsen are hot springs, with the water heated by volcanic activity, that were used for public bathing and are still a very popular way to relax. The traditional ones are outdoors, typically with a stunning view of a mountaintop. There is a separate hot water pool for men and women, and you are required to go in completely naked. Japanese often talk of the virtues of this “naked communion” for breaking down barriers and getting to know people. In the women’s onsen at least I can attest to the fact that conversations can become pretty uninhibited. It’s a great way to shake off the winter cold, especially after some skiing – and hey, even monkeys love it! In the photo: the hot springs at Jigokudani Monkey Park near Nagano. 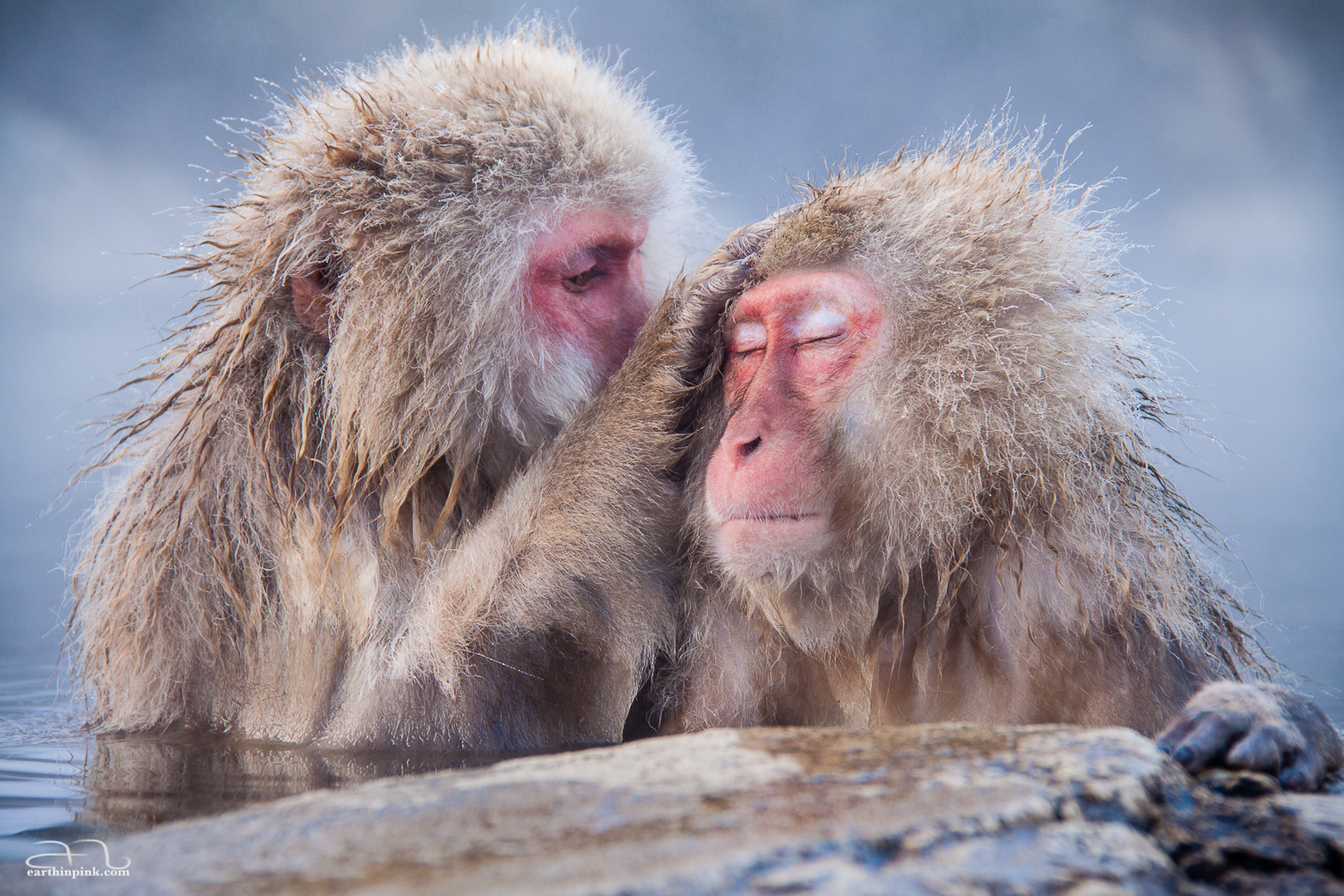 At the Jigokudani Monkey Park, even the monkeys have learned the ways of the Japanese hot bath (onsen).

#8: Watch a parade in Asakusa

Whether it be the religious celebration of Sanja Matsuri (third week of May), the Tokyo Historical Parade (Nov. 3rd), the Asakusa Samba Carnival (at the end of August), or the Sumida River Fireworks Festival (at the end of July), watch the streets close to the Sensō-ji temple come to life with an endless row of people often accompanied by musical instruments and wearing colorful costumes. Even if you’re not here for one of the bigger events, keep an eye out – there’s almost always some small festival (or “matsuri”) at one of the shrines around the city. In the photo: one snapshot of the Culture Day parade in Asakusa on November 3rd. 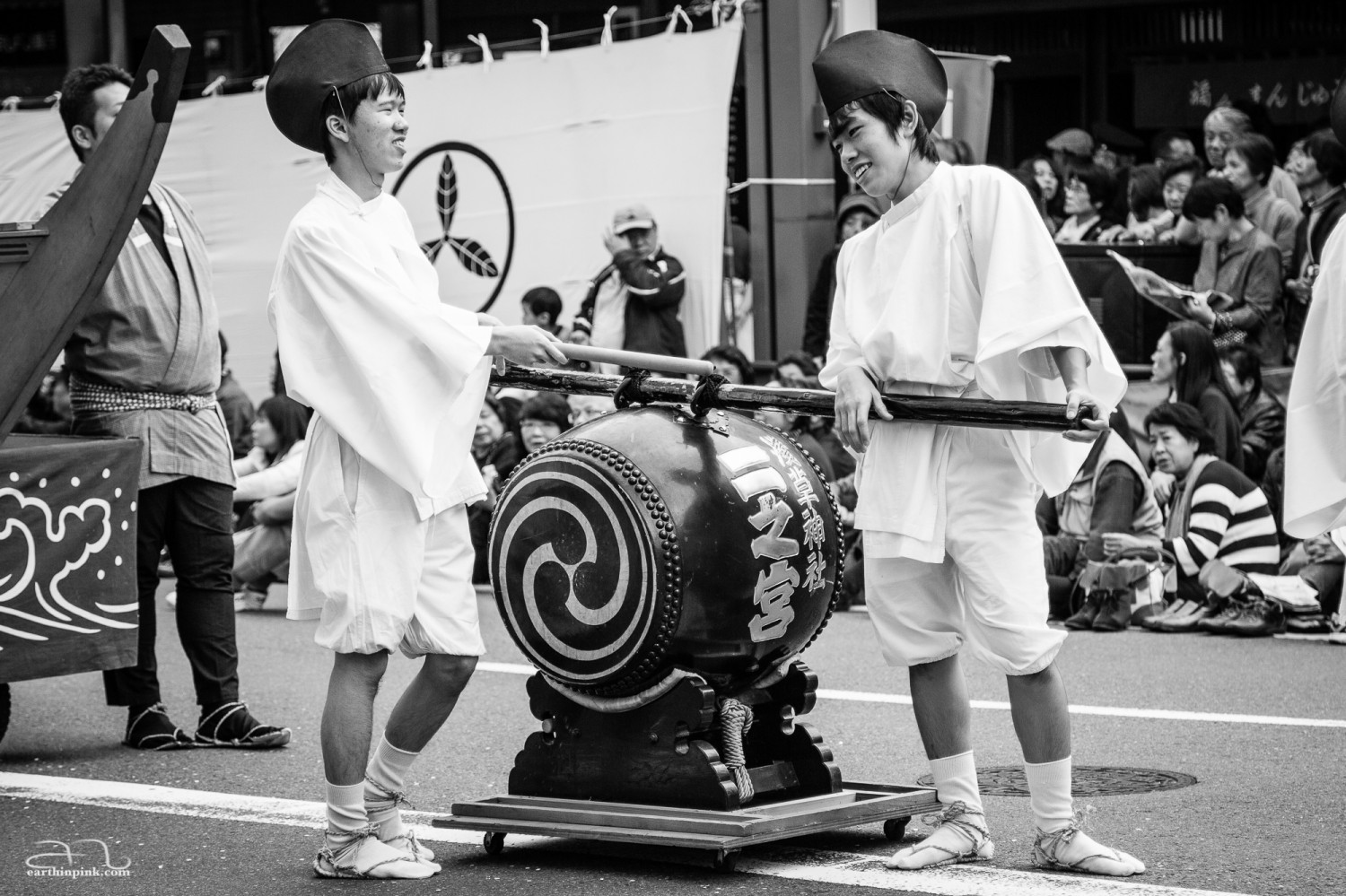 Two boys take a short break from marching during the Culture Day parade in Asakusa.

Last, but not least: the tragedies that ended World War II had perhaps almost as much of an impact in shaping today’s Japan as its natural and cultural beauty. A visit to the Hiroshima Peace Memorial isn’t a pleasant walk in the park – but it is something to be experienced, to make sure this valuable history lesson doesn’t go to waste.

A night photo of the Atomic Bomb Dome at the Hiroshima Peace Memorial Park – the single most powerful symbol of a history lesson that must never be forgotten.